It’s not for the faint hearted as it can be very upsetting . But the thing that makes you stronger is you know you are making a difference even in the worse of situations . If we didn’t have this new facility and our dedicated volunteers a lot of these strays where would they go ? Redcar and Cleveland strays don’t have this worry as the pound they would go to  us . We are much much more than a pound . We never put to sleep any dog unless they are suffering . Dogs with behaviour issues we don’t give up on them we have 3 in our care that can’t be rehomed but we are working with them until they are lucky enough to get a space in a behaviourist rescue . 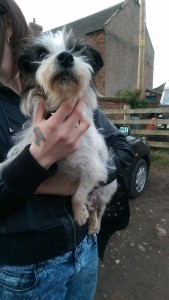 10th April 2016  was a particularly upsetting day . A stray came in through the out of hours that needed to see a vet straight away due to a huge lump on her stomach and she appeared to be extremely uncomfortable .
Lauren the  volunteer that went to pick her up from the finder  took her straight there ,she was told it was too late . Nothing to be done due to this dogs age and health conditions . She has a heart mumour and unlikely to survive the operation . But she has a large hernia , a mass underneath it . It’s dragging her kidneys down and if she stands on this lump it could rupture. The vet said it would be an awful death,and that she needed to be put to sleep .
We paid for a second opinion at another vets 11th April 2016 . Same advice too late she won’t survive pain medication won’t do any good .
Another volunteer Sue,has taken her into her own home , will sleep downstairs with her . Her last night she won’t be alone and will be cared for and cuddled until she goes with her at the end . This is heartbreaking but it has to be done for the dog to stop her suffering She’s not happy , she has to lay on her side but it’s all we can do for her to make her last hours on earth as comfortable and loving as possible .
Please help us to continue to be there for her and dogs like this . Our running costs are now over £2000 per month . We just try to keep our heads above the water we rely on public donations . If we weren’t here this poor girl would have died alone in a kennel .
Please support us dogs like these need us. 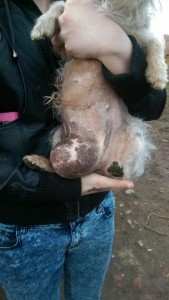